God is building an incredible staff team at FBC and we are excited about adding our next Student Minister! We’re looking for someone who has a passion for ministering to students, parents and adult ministry partners and who will support the mission of FBC in disciple-making. The Student Minister will lead, shepherd and manage all aspects of student-aged programming from 6th through 12th grade. He will be responsible for directing the spiritual formation of students to help them have an authentic faith in Jesus Christ.

If you think you may be the passionate and dynamic leader we’re looking for, let’s connect! Send your resume and letter of interest to  .

In the summer of 1990, Fairfield Baptist began as a mission of Sagemont and Houston Northwest Baptist Church. The church staff now has six full-time ministers, eight Christian counselors, and additional administrative personnel serving a congregation of 1200 members. The first services were held in the Fairfield Athletic Club inside the Fairfield subdivision.

The church purchased 7 acres of land on highway 290 in 1994 and the first worship building was completed in August of 1995. In 2007, a two-story education building was constructed and in 2011, a 700-seat worship facility was completed. Through the years, FBC has been known as a church that teaches and preaches from the Scriptures in a way that feeds and leads people to know God better and love Him more. 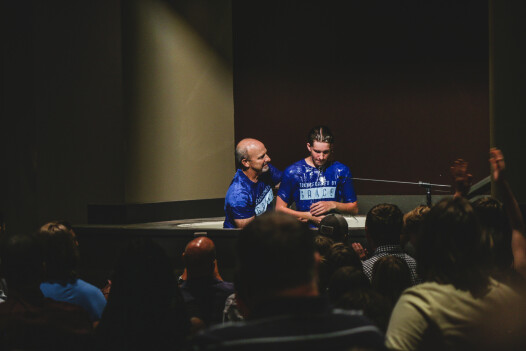 Fairfield Baptist Church is strategically located to serve the people of Cypress and the Northwest Houston area with the Gospel of Jesus Christ. We are a multi-generational, family-oriented church with programs for all ages, from preschool to senior adults. Our mission is to make disciples who make disciples, by the Word of God, for the glory of God, to impact the world. One way we accomplish this objective is by providing multiple ‘Bible Study Methods’ classes to equip members to dig deeper into God’s Word through personal study.

FBC currently offers two Sunday morning worship services 9:30 and 11 o’clcock. We seek to be authentic in our worship, prayer-focused, and theologically-sound in our preaching, teaching, and music selection. Members are encouraged to meet regularly in small groups, supporting one another in more personal settings (Acts 2:42). FBC provides childcare, coaching, and facilities to ensure all families have the opportunity to get further involved.

All members are encouraged to serve, both inside and outside the church walls. We provide opportunities for youth, adults, and families to serve together. Some local ministries include support of a North Houston church-plant as well as an outreach to a lower-income area in a nearby community. The church serves the students and supports teachers at a Title 1 school on a monthly basis throughout the year. In partnership with local churches, FBC regularly serves communities in the Rio Grande Valley. Internationally, FBC financially supports missions and ministries in Honduras, Africa, and missionaries in closed countries. FBC also contributes to The Cooperative Program of the Southern Baptist Convention. We are committed to James 1:27 and the Biblical command to take care of the least of these. FBC hosts an annual fun run and fall event to promote and raise funds for adoption, foster, and orphan care needs, both locally and abroad. We have supported multiple adoptions for Christian families in our church, local community, and beyond. FBC also sponsors an annual retreat for current and prospective foster and adoptive parents. We partner with other churches and ministries to support foster and adoptive families. The church supports a gospel-centered, professional counseling ministry that serves both the FBC members and the surrounding community. The counselors minister to children, teens, and adults, sharing the love of Christ. It has grown from one to eight Christian counselors in four years.

Fairfield Baptist Church is located in Cypress, TX (30 miles NW of downtown Houston), which appeals to residents of all ages. The congregation spans a radius of over 15 miles from the church location, reaching into the communities of Tomball, Katy, Waller and Jersey Village.

Surrounding neighborhoods to FBC include master-planned communities such as Fairfield, Bridgeland, Towne Lake, Blackhorse Ranch, Coles Crossing, and Cypress Lakes. Within minutes of the church, you can find retail shopping, an outlet mall, grocery stores, and multiple A-rated schools in the Cypress-Fairbanks Independent School District.

There are several community walking trails, parks, and pools where neighbors gather. Residents have access to neighborhood sports leagues and athletic facilities, all within minutes of home. Cypress holds all the benefits of suburban living while affording the advantages of a large city, including world-famous medical care, professional sports, theater, diverse food options, and much more.